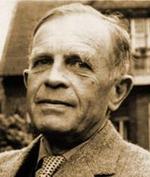 články literatura
Wilhelm Röpke (October 10, 1899 in Schwarmstedt – February 12, 1966 in Geneva) was one of the most important spiritual fathers of the German social market economy.

For Röpke (professor of economics, first in Jena, then in Graz, Marburg, Istanbul, Geneva), rights, moral habits (Sitte), and social norms and values were decisive elements with which not the market, but the state and central bank continually need to be concerned. With a "conforming" social, economic, and financial policy, the task of which is to protect the weak "beyond the market", to equalize interests, set rules of the game, and limit market power, Röpke strove for an economic order of "economic humanism", something which he also referred to as the "third way". Röpke stood for a society and social policy in which human rights are given the highest importance. He believed that individualism must be balanced by a well-thought-out principle of sociality and humanity. Nevertheless, the Ludwig von Mises Institute considers Röpke to be an Austrian School economist.[1]

Despite these seemingly socialistic ideals, he was a strong critic of extensive welfare. A "pocket money state" would gain more and more influence on life and ownership of his citizens, resulting in a non-communistic form of submission (Röpke referred in particular to the German policy before and during World War II). Therefore, social policy should never sacrifice the free market.

Until the late 1950s, Wilhelm Röpke advised the government of the first German Chancellor Konrad Adenauer. His name is linked with the school of Ordoliberalism.